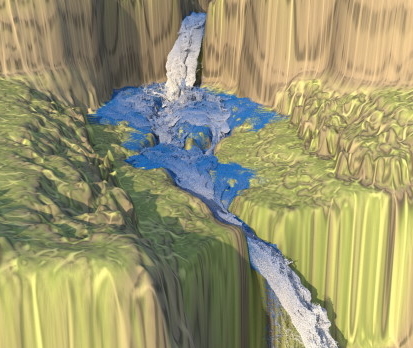 We propose a novel implicit density projection approach for hybrid Eulerian/Lagrangian methods like FLIP and APIC to enforce volume conservation of incompressible liquids. Our approach is able to robustly recover from highly degenerate configurations and incorporates volume-conserving boundary handling. A problem of the standard divergence-free pressure solver is that it only has a differential view on density changes. Numerical volume errors, which occur due to large time steps and the limited accuracy of pressure projections, are invisible to the solver and cannot be corrected. Moreover, these errors accumulate over time and can lead to drastic volume changes, especially in long-running simulations or interactive scenarios. Therefore, we introduce a novel method that enforces constant density throughout the fluid. The density itself is tracked via the particles of the hybrid Eulerian/Lagrangian simulation algorithm. To achieve constant density, we use the continuous mass conservation law to derive a pressure Poisson equation which also takes density deviations into account. It can be discretized with standard approaches and easily implemented into existing code by extending the regular pressure solver. Our method enables us to relax the strict time step and solver accuracy requirements of a regular solver, leading to significantly higher performance. Moreover, our approach is able to push fluid particles out of solid obstacles without losing volume and generates more uniform particle distributions, which makes frequent particle resampling unnecessary. We compare the proposed method to standard FLIP and APIC and to previous volume correction approaches in several simulations and demonstrate significant improvements in terms of incompressibility, visual realism and computational performance. 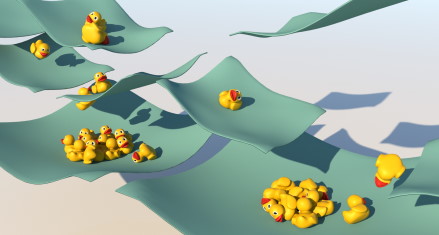 Visually appealing and vivid simulations of deformable solids represent an important aspect of physically based computer animation. For the temporal discretization, it is customary in computer animation to use first-order accurate integration methods, such as Backward Euler, due to their simplicity and robustness. Although there is notable research on second-order methods, their use is not widespread. Many of these well-known methods have significant drawbacks such as severe numerical damping or scene-dependent time step restrictions to ensure stability. In this paper, we discuss the most relevant requirements on such methods in computer animation and motivate the interest beyond first-order accuracy. Keeping these requirements in mind, we investigate several promising methods from the families of diagonally implicit Runge-Kutta (DIRK) and Rosenbrock methods which currently do not appear to have considerable popularity in this field. We show that the usage of such methods improves the visual quality of physical animations. In addition, we demonstrate that they allow distinctly more control over damping at lower computational cost than classical methods. As part of our theoretical contribution, we review aspects of simulations that are often considered more intricate with higher-order methods, such as contact handling. To this end, we derive an implicit linearized contact model based on a predictor-corrector approach that leads to consistent behavior with higher-order integrators as predictors. Our contact model is well suited for the simulation of stiff, nonlinear materials with the integration methods presented in this paper and more common methods such as Backward Euler alike.